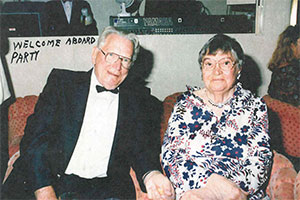 The Ralph A. Cushman Memorial Endowment Fund was established in 2008. The purpose of the fund is to make annual grants to qualified 501(c)(3) charitable organizations that operate in the Greater Cincinnati area whose mission is to further the public good of the community.

This fund has entered into scholarship agreements with the University of Cincinnati to provide a series of scholarships in the Business School and Nursing School. 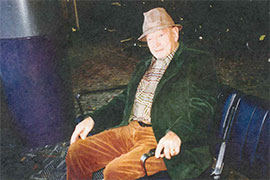 Ralph Cushman was born in Bluffton, Indiana on October 7, 1907. He was a businessman who, along with his wife Myrtle, ran his family business – the Cushman Manufacturing Company and the Cincinnati Aluminum Mould Company. Ralph worked side by side with his employees in the foundry, delaying his own retirement until his long time employees also reached retirement age.

In his free time, Ralph created several gadgets, even obtaining a patent on his EZ Kut Cheese Slicer – Bottle Opener. He also enjoyed driving his Cadillac or Lincoln and was a dedicated Reds fan.

Ralph was married to his first wife, Myrtle Cushman for 61 years, until her death in 1993. He married his second wife Iris on his 89th birthday. Ralph died at the age of 96 on January 18, 2004. After his death, the Ralph A. and Myrtle C. Cushman Scholarship was set up to financially assist and inspire a student enrolled in the University of Cincinnati School of Business.

Iris Fallin was born on June 4, 1922 in rural Northumberland County, Virginia. As a child, she worked with her eleven siblings on the family truck farm. After graduating high school, she worked in a canning factory, saving her money so she could attend nursing school.

Iris began nursing school in 1942. Upon graduation in 1944, she began her career at the Retreat for the Sick. Iris eventually became the head nurse in the Newborn Care Unit, and worked there until she retired in 1980. Iris continued to volunteer her nursing services to friends and neighbors after she retired. She was also an avid gardener.

Iris married Charles Wilson when she was in her late 30s. She was married to him until he died in 1977. In 1980, Iris married Stanley Taylor of Fayetteville, Ohio. Iris retired from the hospital and moved with Stanley to Ohio. Stanley died in 1991. In 1994, Iris married Ralph A. Cushman, a neighbor and family friend. They were married until her death. The Iris F. and Ralph A. Cushman scholarship was established to give financial assistance, encouragement, and inspiration to a student enrolled in the University of Cincinnati School of Nursing.