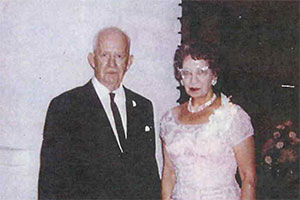 One purpose of the fund was to establish scholarships at Miami University to assist future medical students.

Upon completion of his undergraduate studies at Miami University, Oxford, Ohio in 1914, Dr. Smith entered the University of Cincinnati College of Medicine where he graduated in 1917. Dr. Smith interned at The Christ Hospital and then served in the armed forces during World War I. After this tour of duty, Dr. Smith became associated with Dr. McKim in the practice of urology. 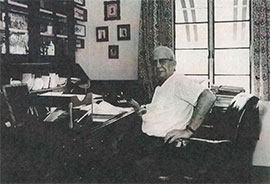 Dr. Smith was a highly recognized and respected member of the specialty of urology throughout the entire world and served in such capacities as Vice President of the American Medical Association in 1942 and Professor and Director of the Department of Urology of the University of Cincinnati from 1946-1952. He served as an active member in many organizations including the International College of Surgeons, Association of Clinical Urologists, honorary membership in the Association of Genito-Urinary Surgeons, the American Urological Association, President of the Cincinnati Academy of Medicine (1932) and was a 50-year member of the Ohio Medical Association. Dr. Smith also served as President of the Christ Hospital medical and dental staffs from 1945-1947. Dr. Smith was a 32nd Degree Noble in the Shrine and a member of Phi Delta Theta, Alpha Kappa Kappa and Phi Beta Kappa fraternities.

In 1952, Dr. Smith moved to Coral Cables, Florida where he served as staff advisor at Mercy Hospital, Miami. Shortly after Dr. Smith’s move to Florida, his first wife died.

Dorothy Smith was born on June 16, 1905 in Greenfield, Ohio to John Mader and Margaret Core and was their only child. In 1935, Dorothy graduated from the Christ Hospital School of Nursing and began working for Dr. Parke Smith in his downtown Cincinnati office. Dorothy Smith continued working for Dr. Smith until he and his wife moved to Florida. On August 23, 1962, Dr. Smith married Dorothy Smith, who was in her mid-sixties at the time.

Upon Dr. Smith’s retirement from medicine in 1965, he and Dorothy returned to Cincinnati. Dr. Smith had a
life-long interest in antique collecting and was one of the founders of the Cincinnati Antiques Festival. The Smiths bought an old home in Montgomery and set up an antique store in the back of their home called the Buckeye Hill Antique Shop. Parke died in 1969 and Dorothy maintained the antique shop into her eighties. Dorothy was diagnosed with macular degeneration, but still kept up an active social life and listened to books on tape in her quiet time. Dorothy died in 2001.

Neither Parke nor Dorothy Smith had children and Dorothy wanted to make sure their money went to charity so the Parke G. and Dorothy M. Smith Memorial Foundation was established in 2002. The purpose of the fund was to establish scholarships at Miami University, Parke’s alma mater, to assist future medical students, to make distributions to Children’s Hospital Childlife Program, which was dear to Parke’s and Dorothy’s hearts, and to make distributions to benefit The Cincinnati Association for the Blind, as Dorothy always wanted to help those that did not have the gift of sight.

Grant Applications. The Fund does not accept unsolicited grant applications.