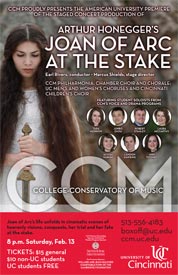 A fund of the Cambridge Charitable Foundation awarded a grant to The University of Cincinnati College-Conservatory of Music/UC Foundation to support CCM’s production of Honegger’s Joan of Arc at the Stake that took place on February 13, 2016 at the College Conservatory of Music. This project helped enhance the professional growth of CCM students and raised the public’s awareness of Honegger’s important work that was recently heard and seen with the New York Philharmonic, Tanglewood Music Festival, Oregon Bach Festival, Carnegie Hall, and Japan’s Matsumoto Festival.

The grant was used to support production costs. Over 300 students from Departments of Voice, Opera, Orchestral, Choral, Dance, Drama and Electronic Media, as well as the UC Men’s and Women’s Choruses and the Cincinnati Children’s Choir participated in this American university premiere.