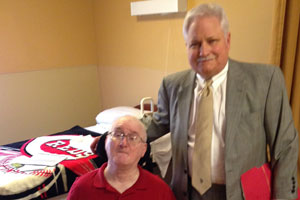 The James A. Henry Charitable Fund

Above photo: James A. Henry with longtime friend Jim Harkness

James Henry was born on August 22, 1941. His parents were James Herman Henry and Gladys Edna Henry (nee Adams). James had one brother, who was about six years younger than him. James had cerebral palsy since birth, and in the forties and fifties, if you were born with certain disabilities, people thought you should be put in a home for the mentally challenged, but James’ mother fought for her son and wanted him to be able to attend regular schools, and have as near a normal life that someone could have with cerebral palsy.

James worked as a systems analyst at the University of Cincinnati and his friends and co-workers greatly admired him and thought he had a brilliant mind. He was described as a person with great patience and also quite the character. James was a member of Western Hills Church of Christ.

As James’ physical condition deteriorated, he moved from his childhood home to Mercy West Park and lived there for well over 15 years in their skilled nursing department. He loved watching local sports and was a big Bengals and Reds fan. He also was a news junkie.

It was James’ desire to establish a fund with the Cambridge Charitable Foundation that could provide annual college scholarships to individuals with physical disabilities, as he understood the struggle it takes for disabled people to go to college, and the importance of broadening your mind. James Henry died at the age of 75 on December 15, 2016, which was 20 – 25 years longer than projected. The James A. Henry Charitable Fund of the Cambridge Charitable Foundation was established on March 14, 2017.

Grant Applications. The fund does not accept unsolicited grant applications.